Ever since doing the first NYC rock show with Debbie Harry on the internet, I’ve always been most interested in the new possibilities of connecting people through technology — in ways beyond ‘info’ / ‘enter’-tainment and advertising. In addition, I’ve always been interested in older people, and people dealing with palliative/end of life issues. Many cultures have spiritual and practical systems in place for this – Buddhists have ‘Bardo’ groups who sit, meditate and chant with you; Hindus take their loved ones to the Ganges; Native Americans perform specific rituals, and so forth.

When Iain told me he was terminally ill, my first thought was a ‘Tuesdays With Morrie’ style ‘living funeral,’ where you invite everyone along for a bittersweet farewell … but then I remembered the Caringbridge.com sites in the USA I’ve used for a close friend and also my grandmother – a very well considered instant-site project for people to set up and communicate with loved ones through an illness or palliative journey — however Iain would need something a little more personally engineered.

Iain and Adele, his partner, came up with ‘Banksophilia.com’ and so I got in touch with my tech comrade Paul at IFDNRG.com and in a flash we managed to get the site up and running in time for Iain’s big “I am officially very poorly” announcement on 3 April 2013.

What’s transpired is moving. The effect it is having on Iain’s readers and fans is clear: as of this writing, the message counter to Iain stands at 12,630, and people have been actively writing him since his passing on 9 June.

The effect it had on Iain was profound, and provided a process for a writer, in written form, to move from this life to the next (although he quibbled with the concept of ‘next’). We’re still working on what to do with this remarkable tribute, and hopefully extend this kind of thing to others in need of it.

Iain spoke of the web site in his last BBC Scotland interview:

The site can be found at: friends.banksophilia.com 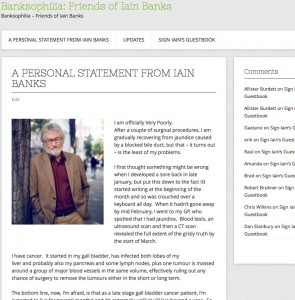 If you’d like to get involved on the next steps of this project, please write to me via my contact page.