The writer and editor talks to Nick Rainsford about his memories of iconic New York addresses, shot by Jonathan Daniel Pryce 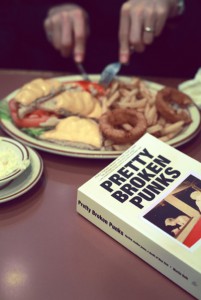 New York, The Big Apple, a city supposedly so good that they named it twice. I’ve never been to New York, but like any of the worlds major cities, I have often fantasised about living there, what part of town I would stay in, where I would hang out and what my New York friends would be like, that sort of thing. Of course being in my head, my New York life is great; gone are the hardships of living in a city because of the simple fact that it’s in my head. But living in a city is hard. It’s demanding and it isn’t for everyone but we are culturally guilty of romanticising city living. New York is connected to so many books, music, TV shows and films that I love, I see it as being integral to the work – a final ingredient that brings everything together as it could only ever come from there; the city is an extra character. For me, New York is cool.

Writer and editor Martin Belk, in his new book Pretty Broken Punks: Lipstick, Leather jeans, a death of New York, looks at the city through the eyes of a resident, someone lamenting what his New York is becoming; homogenised, and losing whatever it was that made it special in the first place. These photographs, taken by Scottish photographer Jonathan Daniel Pryce, follow Martin around New York as he visits the places that once made it special to him, and the memories that exist there. Cities are always evolving and are so much more than bricks and mortar, they are spaces which we interact with, places where we live, work, play and love. 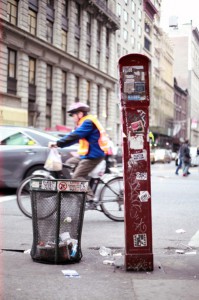 “The gritty, creative hieroglyphs of the natives are on every corner, across the city, ready to be discovered if you know how to read the police box codes like here on Lafayette Street. To be a real New Yorker you can’t come subsidised. ‘Hip’ is not an adjective. Coming with little or nothing guarantees your new, autochthonous self and the choice that once realised, you must choose to stay and die, or sever the chord.” —MLB

“Now, when New York comes back to me it comes in hallucinatory flashes … It never occurred to me I was living a real life there … at some point the golden rhythm was broken…” –Joan Didion, Goodbye To All That 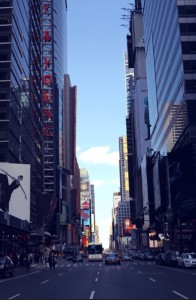 And on New Year’s Eve, no one dances after the ball drops.”

“Tourists are MONEY!” –Sex Pistols, God Save the Queen 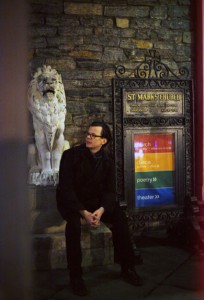 “For some: scene of Sex & the City’s faux wedding. For me: the last place I saw Allen Ginsberg read; where I attended memorials for AIDS victims including Haoui Montaug, the man who brought you Madonna for the first time at Danceteria; the place I read my first written work at the Poetry Project. Perhaps today, Ginsberg might HOWL: ‘I watched the best minds of my generation…’run like hell.” 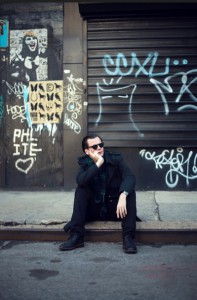 “How do you re-occupy the same space where a girl once overdosed in your arms? Where you had your first kiss from the quintessential Goddess of Rock ‘n’ Roll, or almost got shot by the shotgun-wielding son of a police commissioner? You don’t. It’s never the same.”

“New York is peculiarly constructed to absorb almost anything that comes along.” –E.B. White, Here is New York (1949) 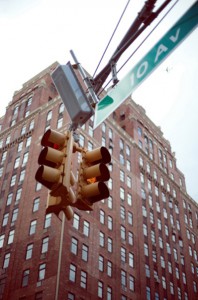 “Some live in the sky, like Madonna and John Lennon at the infamous Dakota, or Debbie Harry and Annie Leibovitz at London Terrace which crowns West 23rd Street. I still have friends who perch in these towers called London. For a time, we created Squeezebox! there — the 90s iteration of Andy Warhol’s Max’s Kansas City. They came down and joined us for a while.” 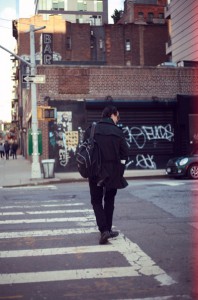 “It’s at 511 Greenwich Street, on the corner of Spring Street. One way leads to Soho, the other Greenwich Village. I spent the better part of a decade on that corner, site of the club formerly known as Don Hill’s. While the rest of the world seemed contented by consumer culture and Giuliani’s culture war, Squeezbox! persisted in making noise and setting the style – up to about 1999. Joey Ramone, Debbie Harry, JFK Jr., Steven Spielberg, Nina Hagen and Drew Barrymore all went in and fell out of the same doors as the rest of us from the lands of misfit toys. Not gay, straight, black, white, male, female or confused: punk, mod, rocker, socialite or hood – just queer.” 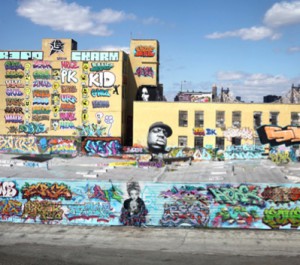 “There are more places still, in the shadow of Empire, Chrysler, and United Nations where people continue to create their own languages. Kerouac wrote a story about losing his father, which they changed to an ex wife, and it still became a voice of a generation.”

“Just as any of you is one of a living crowd, I was one of a crowd” –Walt Whitman, Crossing Brooklyn Ferry 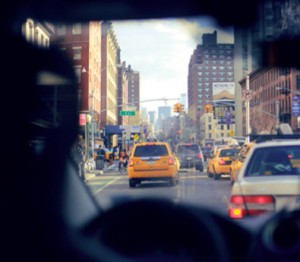 “Obscure to some but not if you’re on the D-L. This building is home to some of the most creative minds in Manhattan. It was the pre-Giuliani-gentrification mythical abode of Alex Forrester from Fatal Attraction, Richard’s quantum leap in The Hours, flocking point of Gotham’s infamous legion of transsexual hookers and an 8am queer sex club – all within walking distance of restaurant Florent, for a wee-hour scene, steak and eggs.”