I never cease to be amazed at the sophistiated creativity that continues to emerge from the 80s-90s East Village New York City scene — which I enjoyed and knew at the time as merely a safe haven for a band of misfits. Never underestimate the short bus. From Rupaul to Antony Hegarty to John Cameron Mitchell and many others, Gotham has purely gone global. Mx Justin Vivian Bond’s show at Vitrine, London is informed and cohesive, with a strong personal narrative — my favorite kind of art. The diptych portraits of Mx JVB juxtaposed with model Karen Graham are soft and alluring, yet bear a compelling human-ness that lifts the figures beyond the surface, and creates a conversation between the deities and observer. Although I’m not a professional art critic, I did notice that Mx JVB’s technique is precise, and does not rely on laissez-faire watercolouring of the inattentive hand. 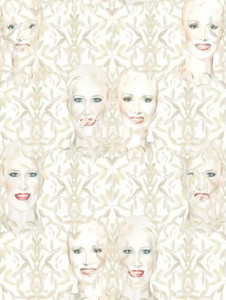 Taking this from ‘show’ to ‘experience’, which many attempt but few manage, is how Mx JVB steps beyond the fourth wall of the gallery space in the front window. Upon arrival, to my delight, a large crowd gathered outside — not to wait in some queue while vying for some perverted association with fame (which haunts most openings imho) — but to observe the artist transcend the barriers of ‘art’ and present an opportunity for observers, both intentional and passersby.

Dressed in a bright pink silk dress by Graham’s designer Frank Masandrea, we observed Mx JVB perform; taxis shuttling people to and from London Bridge Station slowed to watch us; and local residents on their way home summed up the invasion with piqued curiosity. The walls of the window and inside the gallery was covered with a bespoke wallpaper created from repetitive portraits, reminiscent to me in tone of the rare Warhol gold-leaf sunflower wallpaper — but this art is not ‘pop’ it’s present, a presence — complete with an intimate boudoir installation highlighting the relationship between the two characters. The atmosphere intimate, the crowd congenial, the conversation sublime. As a complete bonus, with a fortuitous announcement yesterday by the fine people at the Oxford English Dictionary, the prefix ‘Mx’ (pronounced ‘M-ix’) has been made official – a pure highlight of the event.

In the wee-early 90s, I met a Justin Bond, who in all honesty never ocurred to me as strictly male, female, or this or that. To me, Justin has always been Justin, simply a beautiful, determined being. Along the way Justin adopted, dare I say co-promoted, the gender-neutral prefix, which I first noticed on JVB’s web site. Now it’s official — a far cry from the raucous word-police vitriol of late — and to me curiously appealing, inviting, and freeing.

Now the only question I have for Mx Bond is: what is to become the associative pronoun-nomitive? Mr = ‘him’, Miss/Mrs/Ms = ‘her’ and so forth. What is to be used with ‘Mx’ and take the incredible chore out of sentence-crafting for articles and reviews like these? But au contraire, perhaps that’s the point: get rid of them all. Look at people as humans. Struggle to redefine…

What? Art, ideas, artists, stepping forward, affecting life? Being alive? Instead of, like Quentin Crisp said, being ‘hung on a wall to die,’ or buried in the comments section of some gossip column?

I know at least two old ladies on a wealthy pension who’ll drink to that.

My Model / My Self

thanks to Christopher J Barley for additional photos