“I don’t care much about it…” grandma Ruby pondered out loud, while we sat in the din of the failing December North Carolina city sunlight. “Why not?” I asked, looking around her massive living room, with three sofas and at least three comfy wingback chairs and a goose-necked rocker, in case ‘company’ came. 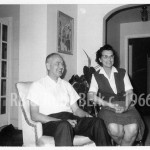 “When I was a young girl, my Daddy’d come in from work on Christmas Eve, we’d go to church and then go cut a tree. Decorate it with popcorn. Next day we’d eat, get a few things, then clean it all up and out the door it went.”

She never mentioned my great-grandma Huntley. And it wasn’t because she was half American Indian on account of her mother, my great-great called Polly Cason in English. No, the shame and the pain came from losing her mother at a young age. But I imagine she was with them when they had their Christmas-in-a-day: cooking, baking or making nice things. Much like Grandma Ruby did for me throughout the year.
All of my grandparents knew the value of making things. Creating life, as opposed to buying it. I’m glad they were spared the spectacle of “Black Friday” with the gift of death.

Grandma Ruby never attempted to thwart my Christmas. As a young teen my Dad’s part of Christmas would come to her house in a big box, delivered by the brown man. It would contain all manner of packages wrapped for my sister and me. Grandma Ruby would get as excited as I did, and let me open everything right away.

The things Daddy sent were foreign — he worked for big time clothiers, and I’d get nice things — shirts, sweaters, socks and jackets — to big for my body, but not for my imagination. Daddy gave me license to dream.
Other than delivery day, usually on the 20th or so, the only sign of Christmas at Grandma Ruby’s was a foot-high miniature tree my aunt Susan managed to sneak in and place on the dining room buffet, amid calls of “I don’t want too much — it’s all a big build up for a big let down.”

Indeed, although each year, joining the miniature tree on the buffet was grandma Ruby’s famous coconut cake. Five layers — more if she could fit it on — of the most delicate, home-baked angel food cake, suspended in an ensemble of her secret freshest spritzy hand-grated coconut, heavenly whipped cream cheese, fresh cream, sour cream and sweet white sugar icing brought together with a blissful vanilla reserved for special occasions. To have a slice was to taste time — made right Ruby’s coconut cakes cannot be eaten quickly. We’d have a slice, sometimes two, while she’d tell me stories of things she and my granddaddy RB used to do at this time of year.

On either Christmas Eve or morning, Mama packed me and my sister Adrienne and some combination of pets of the time up in her Toyota hatch back and took us up to my other grandparents home in the Blue Ridge foothills. I loved the contrast to the small city celebrations — something about the open land and small gestures of festivity in the form of some lights, or bright red bows on mailboxes made the journey almost excruciating with excitement for me. 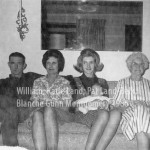 This was a more active, louder affair, and very church oriented. Grandmother Katie took us to the outdoor “Living Christmas” with the Baptists, and my aunts and uncles would take us to singing and so forth with the Lutherans and somehow, even the non-denomenationals agreed to come together on the 25th for a meal and gifts and the mayhem of getting around 30 people all into a house built for a small family of five.

Inside, my grandmother Katie directed things from the kitchen, while the others clumped in small groups throughout the house and on teh front porch. She liked to decorate her house — with a tree in the living room and greeting cards she’d received all around the archway leading to the dining table. She’d make turkeys and hams, a monster potato salad and her pièce de résistance: oyster stuffing with fresh gravy. A lot of the things we had, pickles, jams, jellies and green beans had been grown by her and my grandpa William the preceding summer, and during August visits I’d watched her can them all in preparation for the long winter.

My great-grandmother, Blanche Gertrude Gunn Montgomery, was the cheeriest elf in the house. Although confined to a wheelchair from which she held court since around her 97th birthday, she glowed with excitement with the approach of every cousin, child and new grandbaby. She’d dress in a bright red blouse and white shawl she’d knitted herself, and grandma Katie would make her a little pendant out of some holly or somesuch from outside. At times, before or after the crowds, she’d ask me to sit on her lap — and did so up until I was 16 — and would get a fresh apple or turnip and sit with her knife and shave little pieces for me while she told me about what life had been like for her since 1883.

Later, when the conversations would begin to lull and great-uncle somebody would nod off into a snore, I’d tag along with my grandpa William out to his barn, to help him feed his cows. The cows seemed to like me, as I could get them all to come straight away with a bull horn I’d been given one year, and they’d allow me to mingle in between them as they ate the hay and grain grandpa’d grown and stored. Even the massive, 2-ton bull would leave me be, so long as i didn’t try to pet him like I did the heifers.
“Do they know it’s Christmas Papa?”
“Well, I don’t know son, they might.”

Today, 25 December 2014, and a world away in the centre of Paris, I now recognise and understand the times, during those times, when any one of these people would take a brief minute out from their chatty grandson, and look off in the distance for a memory.