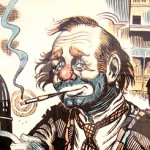 The Alig murder story is akin to 9/11 for NYC culturists – we all had a connection, we all remember hearing the news, we all saw the various iterations to come like Disco Bloodbath. In the past few weeks Michael Musto sums up more than a few and also has some cautious comments on associated trends. Me? I was sitting at  the computer in 1996, working on the Squeezebox! invites when an email popped up that Freeze had been arrested and Angel was confirmed missing – which triggered a memory from months earlier which struck me strange.

15 March 1996*, a date which I’m reasonably certain Angel Melendez appeared at Squeezebox!, at Don Hill’s — not necessarily his scene. I didn’t know Angel personally, and was somewhat surprised to see him in our room. I took his presence as both a positive cross-pollination of scenes, but also as a threat of imminent invasion of annoying club kids en masse. As the early band played and I surveyed the crowd and for a second we caught eyes across the room — not with a smile, but a curious look that also brought on a spooky sensation for me, an energy I’ve never forgotten. What might he have been searching for, away from his normal neck of the woods? We’ll never know. Of course, within 47 hours, he was dead.

In fairness, we all ran around scene shopping in those days — one of the joys of pre-assimilationist cookie-cutter New York. And although a matter of personal taste, there was more to nightlife than Limelight – from Palladium to Mars to Supper Club – so anyone making out like lower Sixth Avenue was the only epicentre of nighttime New York City is either still high, still high and delusional, a press agent, or under 35. I was Alig’s ‘Rock ‘n’ Roll Nigger’ on the giant screen at Club USA. He paid me fifty bucks for doing it and told me how sexy I was. Flattery got me on film. I’ll never forget the leftover blue paint in his ears from the night before on the day of the shoot and thought to myself “these kids don’t bathe.” Years before, circa 1987, just after Boy George’s birthday party at MK, Alig, dressed in nothing but a pair of white BVD’s shoved a bottle of Jäeger at me, turned it up and said “want some Quaaludes?” He then proceeded to drag me to the basement of Cave Canem to the hot pool for a swim. I didn’t get wet. I escaped lightly.

So, what? Two things. First, I’ve worked with prisoners, most of them young murderers, for the past 7 years. What seems to be occurring right now, on the outside, is setting Alig up for a swift return to jail, without passing go or collecting the two hundred bucks. Nothing worse than yesterday’s burnouts trotting him out for some lame-assed ‘Alig Returns’, ‘Disco 2014’ or ‘Jailbreak’ party — just so they can justify the drug habit and sex addictions they’ve never recovered from. Reunions are so 2001. The worse part, it’ll give Rudy and Bloomberg’s ‘Quality of Life’ people finger-wagging privileges, ‘I told you so’ bragging rights.

Second. The city we knew is gone. People today worship at the altars of acquisition, rather than the dance floors of desire. And it isn’t just New York City — London, Paris are all McBraindead. They’ve even killed Berlin with high rents before it even made a good whimper for renaissance. They’ve gutted St Christopher Street, and St Vincents is in ruins. The whole world cries for us to hurry up and ‘get married’, take $1000-a-month Truvada pills and join the legions of the assimilated culture of stay-at-home porn. None of this should be news. New York is dead, and Giuliani killed it. Gatien was Rudy’s enemy #1 which propelled Alig to the front lines of the culture battle. Let’s not finish losing the war, shall we?

Perhaps I underestimate. Alig was one of a larger group to previously galvanize a chunk of a scene and city. He once transformed fast food joints and empty subway stations that reeked of piss into salons of Dada homage and the exquisitely absurd. What might he come up with on a bigger scale for an entire city that is now comprised of banks, soulless chain stores, frozen yogurt shops and money laundering, erm-cough, nail salons? To paraphrase Quentin Crisp:

“You must never run with the masses. There is danger in numbers. They may force you to perform an act which is beyond the limits of your chosen style. The masses make demands on the dreary grounds that they are one of many who are alike. But the stylist asks for what he wants in the name of the fact the he is unique.

Everything in the world except diamonds, everything, even people are subject to the laws of scarcity value. As it becomes known through your style, that deep down there is only one of you — when the time for serious bargaining comes you will win.”

But is being this kind of unique even possible these days? More recently, at Antony’s Meltdown Festival, London 2012, Kembra Phaler (The Voluptuous Horror of Karen Black) observed: “You know how they say everything happens first in New York? Well, it’s true, and we’re dying. You’re going get to watch New York be the first modern city to die.”

Back in the day, Alig and others created, and promoted their versions of an autocthonous (original where found) scene that would eventually devour itself — prophetic in a city that would soon be overwhelmed with big business and advertising and mall-rat tourists masquerading as real culture devouring each other. Nostalgia is not unique or stylish, in 2014 it is a commodity.

New York City – the one in everyone’s imaginations as well as the real one, along with the other once-great cities of the world are sterile. Society is falling for media-driven PC fascism. It’s a global game. Now, more than ever, these cities, Gothams-plural, certainly need a new dose of the assertively absurd — but not in a damn corporate club and not from middle-aged was-been narcissists — there’s a Corvette dealership somewhere waiting for them. And let’s face it, the former hub of all this is now a mall.

The rock-roll-remember prospects to me are about as invigorating as another Squeezebox! reunion or Studio 54 party thrown by a radio station with a DJ playing records from some dusty warehouse in Dallas. Every scene I’ve seen attempt a remount ends in cultural tragedy. You cannot go home.

Our young people today deserve better than to be lied-to by people who once created scenes and works of genius, but like Peter Pan, have never grown up. It’s not 1996 anymore. So, what’s it gonna be? More smoke & mirrors, or real redemption?

*Post-script: Just an hour after posting this I heard from a fellow Squeezeboxer – a new twist: that night, Angel was apparently delivering, not drugs as one might venture, but a set of wings he’s made for a friend to wear go-go dancing the following week. The date is correct.