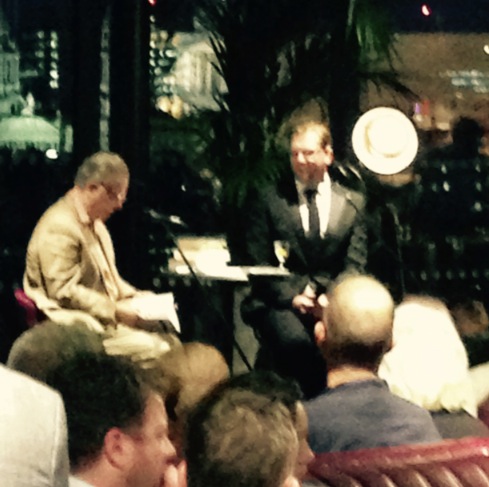 The usual relentless stentorian bombast of the ‘McBillion tickets served!’ aside, this year’s Edinburgh Fringe Festival left me generally underwhelmed.

A recent conversation with a bigwig producer in NYC about the dumbing down of our society, and the mediocrity of the agora gave me pause.

The thought of having to re-word & re-submit that funding application o-n-e m-o-r-e t-i-m-e gives me agida.

Other than the shrill of January, September is perhaps my least favourite time of year. If according to Rimbaud, “Spring brought the idiots’ frightful laughter,” September brings their precocious Christmas chatter. ach-em.

But then, this budding playwright wanders into Mr Barr’s London Literary Salon, and a talk with fellow expat New Yorker John Lahr – probably the only living man qualified to speak on a grand, global scale about acting, performance and theatre. He reads and discusses his new book: Joy Ride.

“Part of the theater’s big magic is its ability to exhilarate; […] to put us beside ourselves, to banish gravity, to call out our most buried feelings, to make the moment unforgettable, to kill time. That’s its joy ride.”

Quoting Tallulah Bankhead to a would-be actress: “If you want to help the American theater don’t be an actress, dahling, be an audience.”

“Theater is an artisanal industry in a ethnological age. Everything about it goes against the grain of our distracted, fast-moving cultural moment. A play requires an audience to work […] in a film, the audience sees what the director wants it to see; with a live production, the audience must take more responsibility…”

Quoting George Bernard Shaw: “The play was good but the audience was terrible.”

Quoting Fanny Brice: “There’s no director who can direct you like an audience.”

Now, more than ever, theatre is not only a demonstration of courage but an engineer of it.”

Thank you, Mr Lahr. You saved me from September. I’ve always relied upon the strangeness of kindreds.